Bohm and Inner-Ordered Mutation: A Perspective on Biology and Physics

All of reality can be ordered levels of reality, and there can be infinite number of such levels. These are in a dynamic plenum, flowing from and through each other, and generating an explicate order, which is the reality currently addressed by science.  Such levels are themselves ordered in hierarchies. This view of reality was developed by the theoretical physicist, David Bohm (e.g., Bohm, 1980). In 1967, he took part in a symposium, organized by the developmental biologist, C. H. Waddington, in which, Bohm presented, in part, this theoretical view, based on his own investigations into quantum mechanics. In those investigations, Bohm strove to demonstrate an underlying level of order to quantum phenomena, manifesting as an underlying and hidden determinism or deterministic potential of implicate orders, which unfold into an explicate order. In this symposium, Bohm addressed biological issues in the context of a reality of orders. He postulated that mutation in organisms and within evolution are not random but follow an inner ordering as reflected and enfolded dynamically through the orders of reality. Such an inner ordering of mutation would be a necessary component of evolution, he proposed. As Bohm states in this regard:

One observation that could be relevant would be to trace a series of successive mutations to see if the order of changes is completely random....There may be a tendency to establish a series of similar changes [mutations] or differences that would constitute an internally ordered process of evolution... in which mutations [in a transitional species] tend to be fairly  rapid and strongly directed in some order... If such deviation from randomness could be found, this could have very far-reaching consequences. For it would imply that when a given type of change [or mutation] has taken place, there is is an appreciable tendency in later generations for  a series of similar changes to take place. Thus, evolution would tend to get 'committed' to certain general lines of development. Of course, survival in the total natural environment would ultimately decide  which lines could be sustained. Nevertheless, an entirely different principle of internal order would determine both the nature of these 'lines' and how they would tend  to vary and transform into other 'lines' (Bohm, 1969).

In 1967, it was postulated by the author that evolution has occurred through the controlled, directed mutation of genes. This control was due  to genetic mutators, which enhanced  the degrees of mutagenesis and the timing of such, giving such mutagenesis developmental features and providing evolution with an inner, non-random parameter (Lieber, 1967).  Subsequent, published research by the author gave repeated support to  the view that mutation has developmental features, such as spatial-temporal control at various genomic levels of organization. And thereby, such inner, developmental control at different levels would have provided evolution with an inner-order of non-randomness (Lieber, 1972,  1975, 1976, 1989, 1996, 1998b, 1998c, 2000, 2001 2011, 2016, and 2019). This gives a strong credibility, from the stand point of the biological scale or order of reality, to Bohm's theoretical position.

Temporal control or temporality appears to be a significant feature of biological phenomena at various scales, as C.H. Waddington points out in reviewing the commonalities of the articles presented in the 1967 symposium. This suggested a way to present or unify a theoretical biology (Waddington, 1969). Such temporality is clearly evident in the genetic control of mutation, which generates a ordered, programmed mutagenesis. As pointed out by the author, the genetic control of mutation in response, adaptively, to environmental stresses may provide a unifying insight into all biological processes, suggesting a unifying principle of ultimate order and coherence in the universe (Lieber, 1998a, 1998b, and 2016). Temporality, its unfolding, would be a feature of such order. This would be a view similar to that of Bohm's.  A unified, theoretical biology, circumventing a total statistical approach, could arise from such views, which may provide  further insights into physics. A sole statistical approach would be limiting.

Even so, statistics has played a significant role in biological investigations, especially with regard to studies of mutation. A statistical methodology was brought to bear on the study of  inner-controlled mutation in a colonial fungus (Lieber, 1972, 1976). In the colonial, green fungus, Aspergillus nidulans of a particular constructed strain, programmed mutator phenomena in many  green colonies were made evident in the groups of colonies. These colonies had two mutators that interacted with one another in such a manner  as to produce temporally, controlled mutations, manifested phenotypically as yellow sectors. (For a picture of one such colony, see Figure 7 on the first page of this website.) These colonies were studied using statistical methodologies. Many of the colonies exhibited  controlled mutation frequencies very similar to one another. Yet, some  other colonies in the same experimental group had reduced mutation frequencies, and those mutations were not so ordered. However, such statistics did not reveal certain information as to what caused some colonies to exhibit a difference in mutation frequency and pattern from that of the high mutation producers, a few differences being major. In other words, the statistical methodologies did not reveal the  cause  or dynamic for variations in the degrees of such mutator phenomena between colonies composing each sub-group. The statistics revealed only information for any group of colonies as a whole regarding the most likely global effects of the mutators. Of course, likely explanations were postulated, many pertaining to the known genetic instability of one of the mutators itself.  However, the statistics did not inform one of the pattern of such instability, nor its temporal occurrence.

In subsequent studies, colonial mutator strains derived indirectly from cultures stored for a significant period in cool temperatures displayed lower, less programmed mutation frequencies when such were grown at culture-growing temperatures. Some, in that group produced  relatively higher frequencies of mutations or mutant sectors than other colonies in that group. (See an example of one such colony at the end of this article.) Again, statistics did not provide insights for such differences in mutation frequencies. Also, though of the same strain, the colony pictured below differed from the colony in Figure 7 in mutation frequency and in the pattern of such mutations, as noted by observing the mutant yellow sectors produced by the respective colonies.

Why would this be the situation? The statistics applied to this specific situation did not provide insights. Yet, non-statistical based postulates were made. These pertained to age of cultures and the possible influence of high temperature. Only when grown at high temperatures were very high, programmed mutations generated again in a highly programmed manner within colonies, with very little variation in frequencies. This could be inferred from the statistical data involving experimental and control groups of colonies. The high temperature, or high infrared radiation, acted as a non-local agent in the promotion of a high degree of programmed mutation within the experimental colonies. However, the statistical method did not address or explain this, and an epigenetic explanation was given that again circumvented statistics (Lieber, 1972, 1976, 1998b, 2016; also, see articles on this website.) Again, the explanatory power of statistics is shown to be limited. This limitation is analogous, if not similar, to the statistical investigations in quantum mechanics.

Such statistics is based, for example, on studies of the behavior of large numbers electrons or the behavior of large numbers of atoms exhibiting radioactivity. The statistics does not provide information  as to behavior of an individual electron as far as its trajectory or path is concerned, or, when and why an individual atom becomes radioactive. The statistics does not address causation at that level. In fact, it precludes an awareness of such causation or an ordering, integrating process. As Einstein indicated, such statistical limitation makes quantum mechanics itself unable to present a complete view of reality. The implication would be that quantum mechanics is incomplete. This is a position that Einstein held through the years. As Albert Einstein wrote on this subject in 1949 :

In studying biological processes and quantum phenomena, statistical studies leave out significant information pertaining to the behavior of specific structures and processes. Though biology and quantum mechanics operate on vastly different  scales, they display the same  lack of accessibility to the causes of deeper, specific phenomena through a statistical approach. Within both scales, the accessibility to causation at a specific level becomes precluded. As with quantum mechanics, biological knowledge is also incomplete, lacking a unifying  concept or perspective as to underlying dynamics that connect specific situations. David Bohm and this author have attempted, through their respective and similar theories and approaches, to circumvent this problem and to show that reality with its various features is dynamically and coherently unified through all scales. And thereby, it can be accessed more completely through new experimental approaches and a flexible application of reason. This would bring us towards completion in our knowledge of quantum mechanics and biology. As Bohm stated:

More generally, what is needed, in physics as well as in biology, is to perceive the existing facts anew, in the light of the notion of order, and of a hierarchy of orders. Such perception will evidently tend to lead us to ask new questions in our scientific research (Bohm, 1969).

The limitation of statistical approaches could thus be circumvented in physics and biology. A new paradigm could eventually ensue. 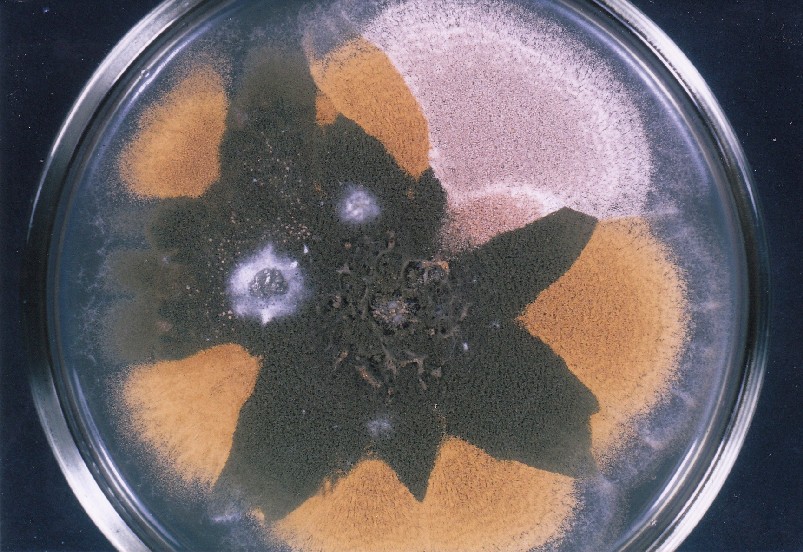 A dual mutator strain of Aspergillus nidulans. This colony was derived from spores produced by a newly generated green sector of improved growth rate and smooth morphology. That sector emerged from a colony obtained from spores produced by a colony that was stored in a cold room for a significant period. Other colonies were obtained from the spores of other green sectors, but those colonies produced far less yellow sectors. One could also ask why this colony displayed a mutation pattern different from the one in Figure 7, even though the above colony is of the same strain as the colony in Figure 7. And both were cultured at the same temperature. Yet, the statistics precludes any idea of a cause. The white sectors are endemic to colonies of the dual mutator strain, as inferred from statistical data, but not the reason or cause of such. See the article on evolution in this website for more detailed information about the Aspergillus strains involved and their histories.

Lieber, M. (2011). The problem of antibiotic resistant bacteria. The important role of environmentally responsive mutagenesis, its relevance to a new paradigm that may allow a solution. Theoretical Biology Forum. 104, No. 1: 91-102. 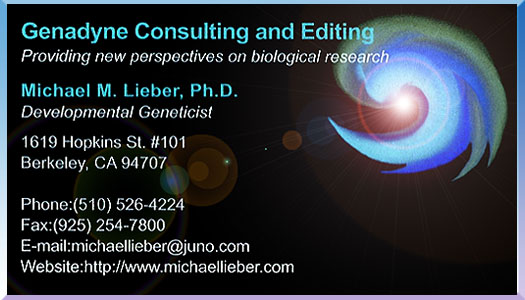